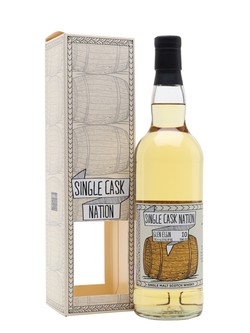 From Paul Bovis at parkwhiskeysociety.com:

Nose: A very fruity nose that goes in all kinds of directions. Most prominent is pineapple, but orange is not far behind. I’m getting quite a bit of zest, but also the flesh or an orange as well. Lying underneath are some crisp red apples. I’m mostly getting ginger for spicing, but not a whole lot else. Not surprising as, like the Teaninich and Tomatin before it, this is a second fill Bourbon hogshead (or barrel in Tomatin’s case). I got a little bit of a white grape note when I first poured this, but that has almost completely dissipated now. There is a small amount of vanilla. As I nose this over time I discovered a faint toasted sugar note. Nothing to report in terms of oak. Once again, this is very distillate forward. I see a trend forming here with the SCN releases. They’re wanting the distillate to shine through.

Palate: Almost right away, I’m getting pears poached in syrup. Almost stronger than I got on the Teaninich. The first sip was shockingly easy to drink. On the first couple of sips, that pear note was almost too dominant in its sweetness. On subsequent sips, more notes come forward to balance this out. My tongue is starting to tingle so I have to slow down. Initially, the nose is light and sweet with honey and a little citrus zing. Then the orchard fruits start to come forward during the development. Mostly pear, but now joined by apple. Then I get more citrus mid-development with a good amount of ginger and clove as well as a sprinkling of black pepper. I’m surprised how much oak I’m getting on the back end of the finish, but it’s well balanced and not overpowering in any way.

Finish: A lovely long finish with a little bit of everything. First a bit of oak and fading spice from the development. Then the apple and pear comes back along with a little bit of dark chocolate. Lastly, I get a faint hint of citrus that makes me want to go back for more.